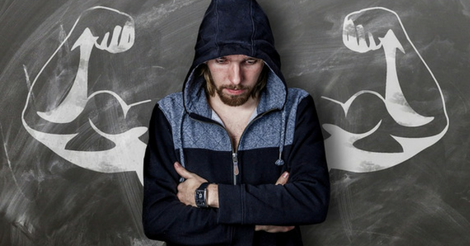 Is sociology even a thing anymore? It used to be one of my favorite subjects to read, I’ve always found the domino effect in human behavior fascinating.  Probably the reason why sometimes is hard for me to write about a behavior subject because I can visualize all the many factors contributing to it, but don’t know how to connect them in a succinct way.  But this is too important to dismiss, so I’m going to try.

We have by far the least “masculine” society since our existence as a species, yet someone felt the need to start a campaign against “toxic masculinity” like if we were plagued with some infectious disease that reached pandemic levels! How did we get to the point where the slightest sign of typical male behavior is considered toxic?  There are several contributing factors, but let’s cover the most easily identified.

We’ve had an explosion of psychiatry drugs being prescribed to children in the 80’s which led to an alarming number of over a million children under the age of 6 being prescribed behavior altering substances today.  Coincidentally,  the number of households in America without a father went from 11% in the 60’s to 25% as we’ve entered the 21st century.  And not so coincidentally,  the feminist movement started in the 1960’s raising the number of divorces and children born out-of-wedlock.

We’ve also seen an increase in mass shootings, mostly caused by individuals born in the 80’s (yes, I have researched this) with a history of psychiatry drugs and single parent household.

Our diet has changed considerably, most of what we eat is treated to last longer than it should or injected with hormones.  I’m not a scientist, but logic tells me that our bodies were not made for this kind of diet and there are consequences to the change in our feeding habits.

Another interesting change in behavior that most tend to see as just the result of massive brainwashing is this instinct challenging gender neutral celebration; it makes absolutely no sense to those who are from a generation where you were either straight or gay but you were still able to distinguish gender because…. well, it’s biology!

Now let’s look at some statistics released by the Department of Justice regarding households without a father:

Read the last one again!!! 75% of rapists had no father figure! This one alone should have feminists changing their tune.

Shall we connect the dots?

Feminist movement starts in the 60’s – households without a father goes from 11% to 25% – psychiatric drugs emerge to treat children who are misbehaving due to lack of proper parenting but diagnosed with mental disorders, and these drugs change the chemicals in their brain – food also containing chemicals that alter brain activity – males start changing physically also, more delicate, more emotional – gender confusion.

We have become the only species on earth that has systematically  worked to eliminate the male influence and the characteristics necessary for the species to survive.

The typical and natural male with all of its characteristics has become so rare that those traits are now seen as toxic, offensive.  It’s like our society is being run by Amazons! At the rate we’re going 100 years from now real men will be on display at science shows as an endengered species.

Statistics don’t lie! They are telling us a story, and that story should have us all concerned…look at the numbers above again, we need men helping to raise our children, real men.

We are here today because the Vikings, the Greeks, the Romans, and all of our ancestors celebrated the masculinity that gave us warriors without forgetting the strength that comes from a feminine woman who gives them life.

Ironically, the same women who accuse men of toxic masculinity just fled to movie theaters to drool over “Aquaman” after they’ve successfully castrated the real men in their lives.  Which proves that we can’t escape our animal makeup, and by trying to we’ve completely upset the balance that keeps the engine working properly.

Let me make it clear that I’m a strong, independent woman with no husband, and proud of my achievements.  Unfortunately,  if I’m going to be honest, I’ll have to say that the only reason why I don’t have a partner in life is exactly because most my male counterparts have become so fragile that someone like me is intimidating, while others have no clue how to act anymore.  They’ve lost the ability to even gauge how assertive they should be in fear of being accused of harassment.

As a woman I understand the origin of the feminist movement, but I despise what it has turned into and how it has completely destroyed the male/female balance necessary for our species to survive… and THAT is the only thing toxic I see here!

Dear feminists…rising by putting others down is for the weak, therefore you are failing to prove you’re equal.

Maybe some brave men out there could start a “masculinity movement”, because our  problem is definitely not excessive masculinity but the absence of it.

4 thoughts on “Is the masculine man on the verge of extinction?”